Moss Removal in the Victoria BC Region

Moss is a tenacious, non-vascular plant that belongs within the ‘algae’ family. It thrives in damp, wet, or shady conditions, especially along the West Coast. The organism itself does not require soil to root or grow, making it an easy-to-spread organism. The inner workings of a moss plant are made up of a system of simple tissues that are intended to transport water. Though moss has a difficult time growing in extreme temperatures, the plant itself can remain alive in a dormant state during the Summer and Winter months, depending on geographic location.

Is it Bad for your Roof?

The short answer, yes. Though moss can present itself in a beautiful form, this simple plant can cause devasting damage to roofs and other surfaces if left for too long. As moss grows, it digs its roots deeper into the surface it is attached to, especially roofing surfaces given their ‘softer’ structural compound. If moss is left on a roof for too long, the roots of the organism will eventually break down the roof composition which can lead to any of the following:

What should you do if you have moss on your roof?

Moss is terrible for your roof, regardless of the amount. The longer moss is left on a roof, the further it will burrow its roots and spread across the entirety of the roofing surface(s). You should consider having your moss professionally removed.

Though moss can be ‘scraped’ off, having the moss removed from your roof may be a more complex and dangerous process than you would imagine.

Because roofs vary in height, it is strongly advised that you have the moss removed by professionals that are trained in roof safety and work safe standards.

Moss removal is a complex process that requires specialized tools and meticulous procedures. If moss is removed incorrectly, your roof could be permanently damaged and may require repair or replacement. ROOFS SHOULD NEVER BE PRESSURE WASHED! 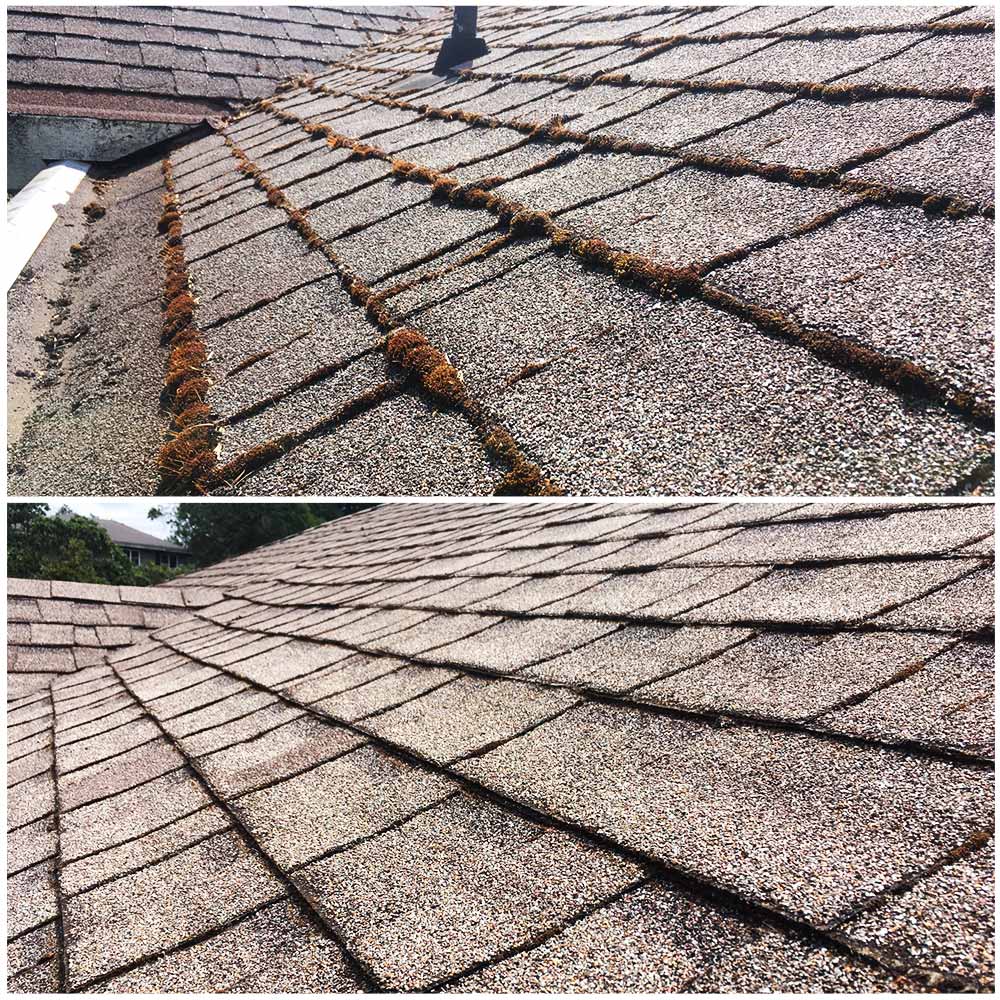 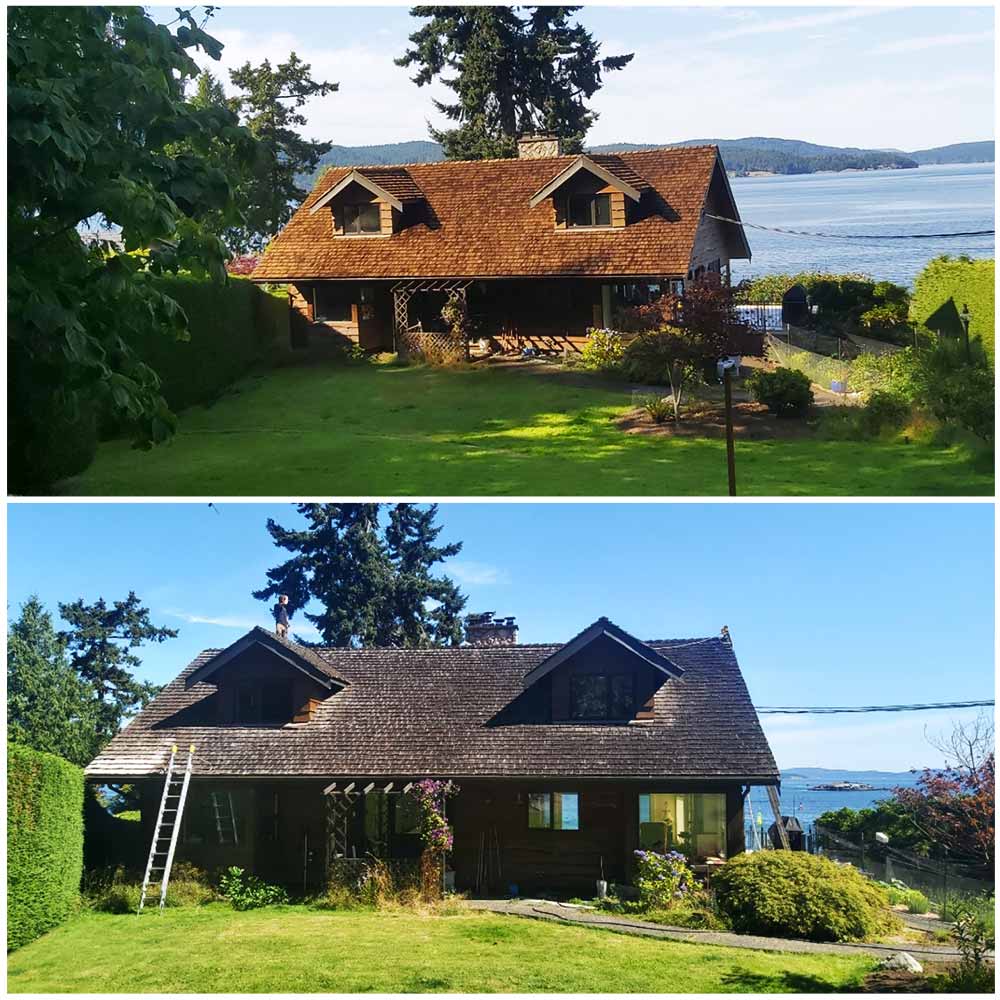 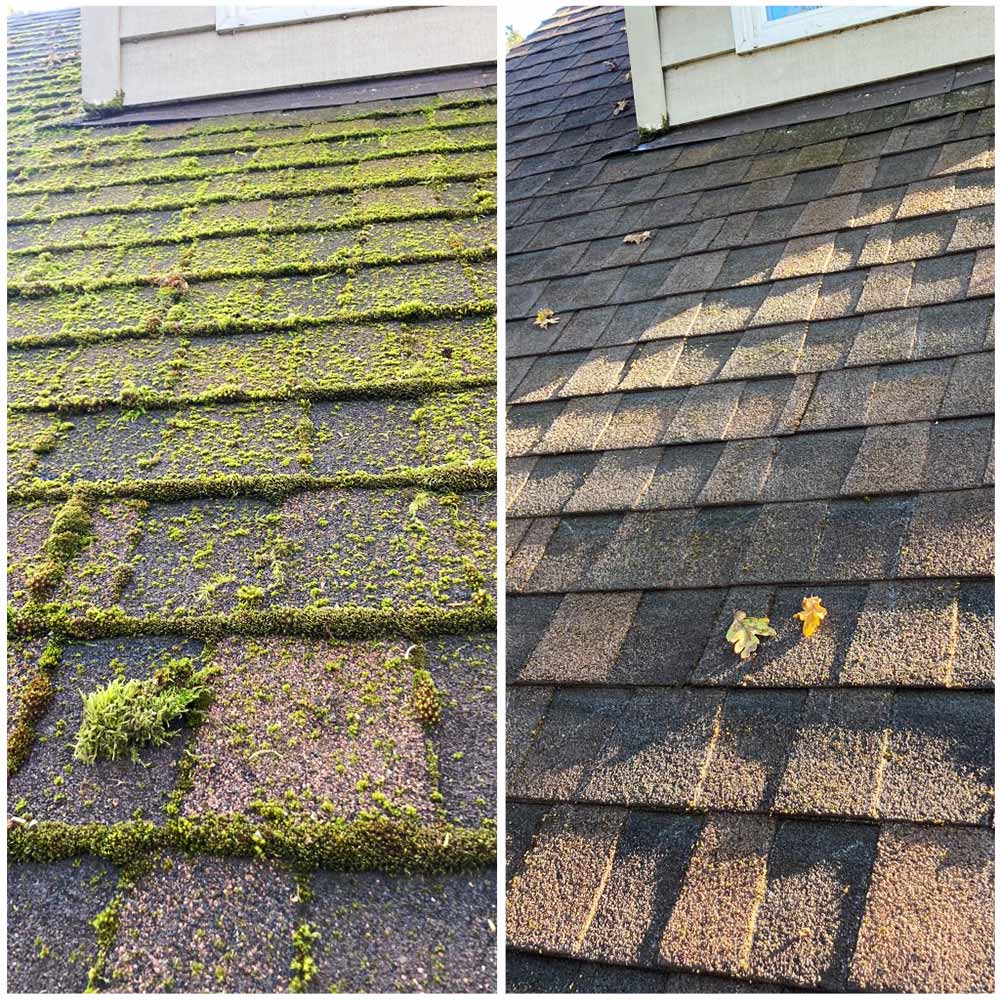 Send Us An Email

How do the Brilliant Brothers Safely Remove Moss?

As mentioned, moss removal is a complex process that requires specialized tools and meticulous procedures. Overall, the moss removal process consists of a 2-part procedure:

With well over 10 years of moss removal experience, we here at Brilliant Brothers Services are proud to call ourselves the ‘Veterans of Moss Removal’.

Once we have accessed your roof, established our safety procedures and reviewed our overall protocols, we begin work by removing the moss with a variety of 100%-safe-for-your-roof tools. Our moss removal tools are designed specifically to remove moss from any type of roof. Our removal methods and specialized gear are completely non-abrasive; we consistently practice safe-for-your-roof moss removal and utilize specific non-damaging tools based on the roofing surface. Different tools and procedures are required for different compositions of roofing surfaces.

Listed here are the types of roofing surfaces we work on:

Once we have safely removed the bulk of the moss from your roofing surfaces, we then go on provide your roof with our *Brilliant* state-of-the-art chemical compound that kills any microscopic growth and provides a long-lasting moss-free guaranty. (2+ Years!) Our moss-free guarantee is the longest lasting moss treatment in the Victoria market to date.
Our chemical compound is a 3-part chemical composition. We have designed this chemical mixture and ratio to ensure the success of our treatment for years to come. Through consistent methods and scrupulous procedure, we apply our treatment while fully protecting your home’s and/or building’s exteriors, surrounding gardens, pets and humans.

Why Choose The Brilliant Brothers to Remove Your Moss?

We here at Brilliant Brothers provide our services strictly based on our 4 overall values: